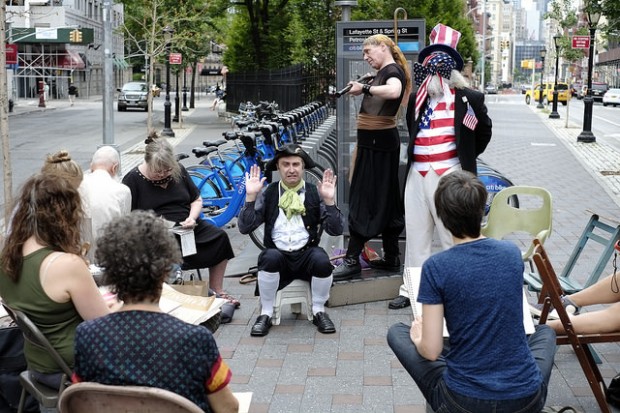 In my previous post Government Money: Prog Rock vs. String Quartet, you may remember my hesitation in supporting the way government money is given to “The Arts”. Basically, the process is too dependent on the taste and prejudice of nameless individuals. The way money is distributed lacks popular input which is what democracy should be about. I promised to suggest some solutions, so here is one.

Why don’t we open the process up at the beginning with input from any American citizen with a social security number and an internet connection? Each American citizen would get one thousand points to award to any project they felt worthy. To offer their points after signing in to the NEA website, they would click a button on the project page that reads “Support”. When clicked it asks, “How many points would you like to offer to support the project?” The citizen-supporter would enter the number of points, and their part is finished. The current selectors could still offer their support for favorite projects by featuring them, but their roles would be reduced from deciders to “influencers”.

Each individual or organization petitioning for money would create a Kickstarter-style campaign consisting of a description of the organization, an under-two-minute video, and a proposal for the project they would need to support. This would create a rolling outlay of government funds for project-based needs. This means no more large government checks at the beginning of the artistic season. Filming a two-minute video and creating a project profile is much less onerous than the current hoop-jumping system. Categories would be simple and broad: music small ensemble, music medium ensemble, music large ensemble.

The larger the organization, the larger the payout, but also the greater number of points required. Within a certain time frame, say one month, if a project reached its points goal, it will likely be funded by the NEA. Americans who pledge their points after the project goal is met will keep their points, although the support will be noted by the NEA. This insures there will be plenty of points (and therefore money) around to support other projects. Like Kickstarter, a campaign must reach its goal for any funding. Unlike Kickstarter, the petitioner doesn’t get more and more money for points surpassing their original goal. Once the number of points needed to fund the project are pledged fully, the funding decision is automatically passed on to The National Council on the Arts which already meets several times a year.

This new and improved process will allow for diversity of input. It will also spread the money around in unexpected ways. It will surely cut out a lot of staffing largess which means more money for the art we love. This simple approach seems more just for sharing money in an open society.